Valley VOTE, a diverse coalition of San Fernando Valley residents, business people, community activists, and organizations, is committed to exploring and implementing programs that empower the people of the San Fernando Valley and the city of Los Angeles, including opportunities to improve local governance, education and public participation on policy matters.

The Size of the City of Los Angeles 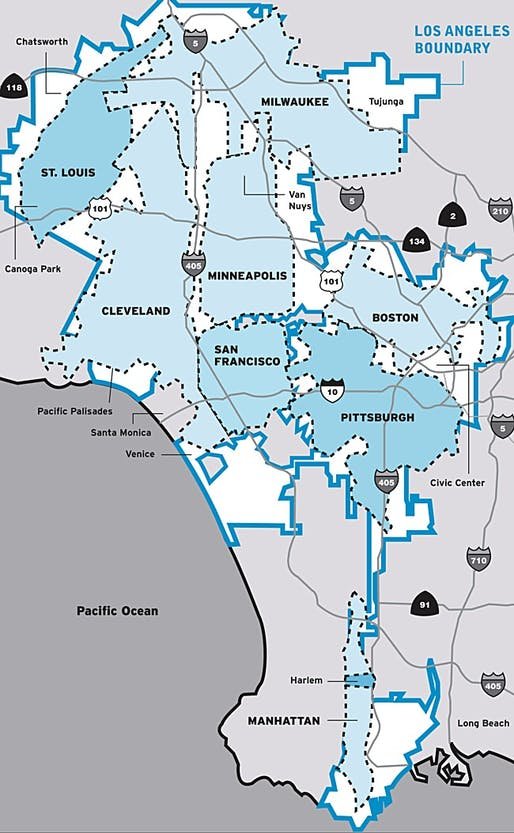 Los Angeles has infamously been known for its urban sprawl. A recently released map makes it look like LA could easily swallow several major US cities inside its bloated city limits belly. See the map below and follow the subsequent discussion on reddit.com.

Los Angeles is so large that you can fit St. Louis, Milwaukee, Cleveland, Minneapolis, San Francisco, Boston, Pittsburgh, and Manhattan all within its city boundaries.

Los Angeles as a state would rank 25th in population.

The Fight for Better Government Continues!

Some years ago now, a majority of San Fernando Valley citizens voted for independence. They were not intimidated by the fear, uncertainty, and deception upon which the special interest-funded anti-city hood campaign was based. Eight million dollars was spent to stop Valley independence, 10 times the amount raised through our modest citizen contributions of $5 to $50.

Valley VOTE accepts the responsibility of working for improved local governance in the San Fernando Valley. Valley VOTE will continue as a nonpartisan lobbying force and as a watchdog to see that promises made by City Hall are fulfilled. We will continue to shake up the bureaucrats so they do not go back to their old ways of shortchanging the citizens of the valley. We shall never give up our dream of independence.

To achieve these goals we have developed a plan of action that is built on the foundation of Valley VOTE Committees. The active participation by the dedicated Board members of Valley VOTE on these committees will provide the organization, determination, energy, and knowledge to support our nonpartisan lobbying efforts now and in the future.

A number of key committees already have been meeting regularly. To see our progress, click on the committee links above.  Become part of the solution.  Join Valley VOTE.